Getting Started With Angular Using the Angular CLI

The author selected Open Internet/Free Speech Fund to receive a donation as part of the Write for DOnations program.

The Angular CLI simplifies the process of getting started with Angular. The CLI also takes care of code generation, production builds, and dependency management.

By the end of this tutorial, you’ll have created an Angular application with the Angular CLI. You’ll use the CLI to create a new app, run it in the browser, and build for production.

You’ll also view how Angular splits presentation, styling, and business concerns into separate units. This involves practicing how HTML, CSS, and TypeScript layers interact with each other.

To follow along with the article, you’ll need the following:

Step 1 — Installing the Angular CLI and Creating Your First Application

In this step, you’ll install the Angular CLI on your local computer and build out your Angular application. To begin, you’ll download the Angular CLI and achieve the following three goals:

Run the following command in your terminal to download the Angular CLI:

To ensure the installation was successful, run the following command in your terminal:

The Angular CLI will print the current version and surrounding environment to the terminal:

To begin working with Angular, you’ll create your first workspace with the CLI called my-first-angular-app. Projects in Angular are known as workspaces.

Run the following in your terminal:

The command will ask some initialization questions used to configure the workspace:

For the first question, type in N as you won’t use Angular routing for this project. Press your ENTER or RETURN key.

In the second question, select CSS as the stylesheet format.

Press your ENTER or Return key to initialize your project.

You’ll now have an Angular workspace named my-first-angular-app. The Angular CLI installs any required dependencies on project creation. For more information about the Angular CLI and workspace creation, check out the [Angular documentation]((https://angular.io/cli)).

Now that you’ve downloaded the Angular CLI and made a new Angular workspace, let’s look at how to run your application in the browser.

Step 2 — Running Your Angular Application in the Browser

In this step, you’ll run your application in the browser using the CLI. Angular’s local development server refreshes the browser whenever the filesystem changes. The fast feedback cycle ensures that you can see the results of your changes as soon as possible.

Angular’s local development server provides you with the following benefits:

Ensure you’re in the my-first-angular-app directory by running this command in your terminal:

Next, start the web server by running the following command in your terminal:

Angular will build your development application and expose it on a local web server at http://localhost:4200. The application will open in a web browser because you added the -o flag to ng serve.

You can verify that this was successful by examining the output of your terminal:

You’ll now see your Angular application on the screen. As long as ng serve is running, any changes to the file system will cause the browser to update with the new content. Keep ng serve running throughout the development process of your application.

In this step, you ran your Angular application in the browser using ng serve. You passed configuration options to CLI commands, such as `ng serve -o’.

Next, you’ll make changes to an Angular component and see the changes reflected on the screen.

In this step, you’ll be displaying content on-screen by editing HTML. The HTML template is otherwise known as the view of an Angular component. By the end of this step, you’ll have learned how to update the starter template with your content.

You can find the HTML for your AppComponent at src/app/app.component.html. Open this up in a text editor of your choice and delete the contents. You should have a blank HTML document ready to write your markup.

Add the below HTML copy to your src/app/app.component.html:

You’ve added a <div> containing a header and a section that includes an unordered list. You will see your unordered list in bullet points and your title in large font due to the <h1> tag.

Notice that your app component updates as soon as you save the document. Feel free to experiment with further additions of your own and witness them in real-time.

You’ve now updated the HTML template of the base app component. This is the entry component for your Angular application. In the next step, you’ll be styling the content using CSS.

In this step, you’ll style your application with CSS. Angular allows you to work with both scoped and global styles. The ability to scope CSS to a component enables flexibility without impeding your designs.

You’ll start by setting up some default global styles for your application by editing src/styles.css:

These styles centers all of your content in the middle of the screen, and sets a warm background color. Keep in mind that any changes made to your global styles.css will show in every component going forward. If successful, you will view the following in your browser: 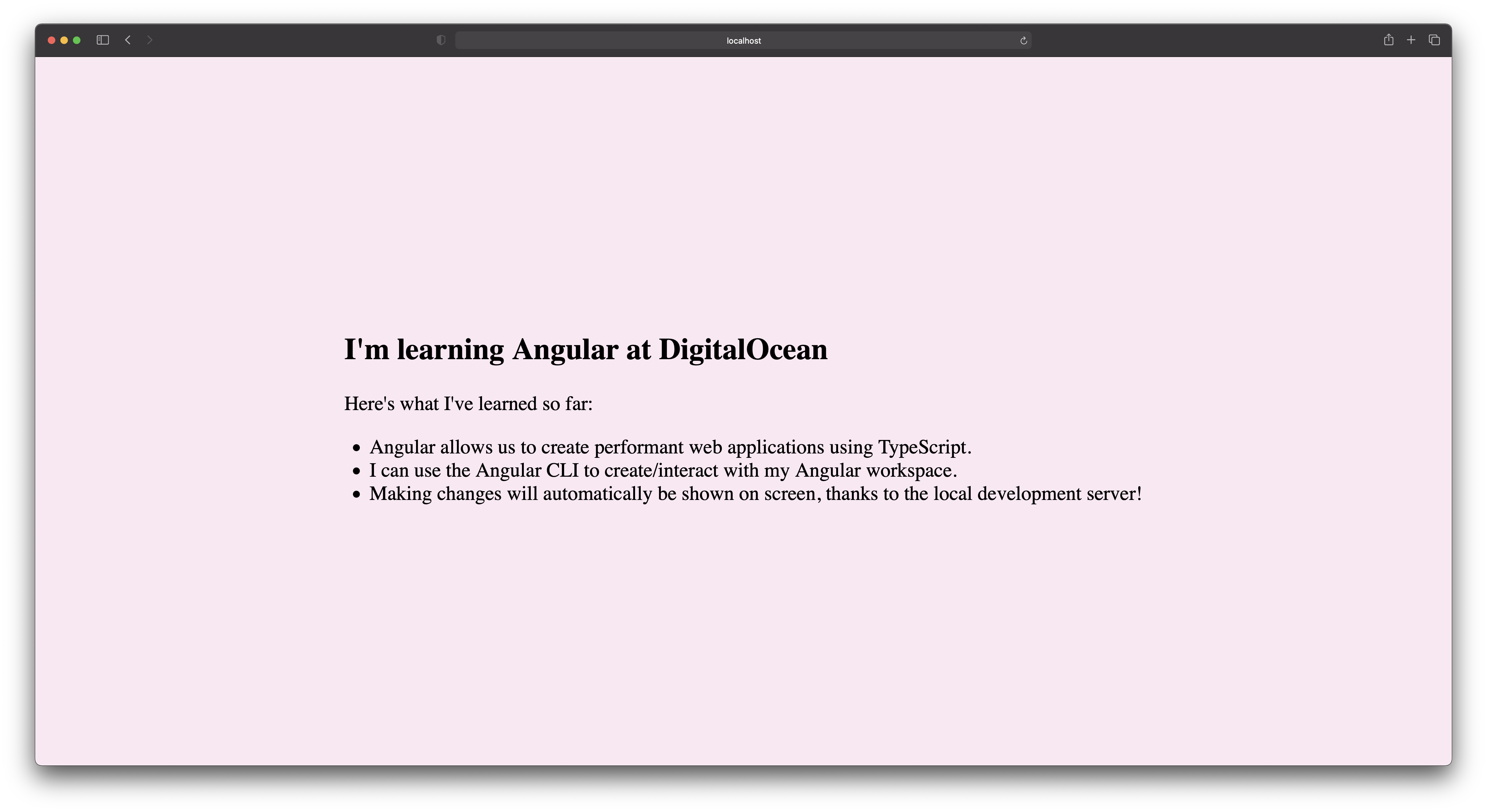 Note: Remember to save your files after each change before moving to the next step.

The Angular CLI adds styles.css to the styles array of the build builder in your angular.json file. You don’t have to manually add a reference to styles.css to index.html.

You’ll review more about the Angular build process in Step 6.

Next, let’s style the app component. Styles added to a component won’t appear in other parts of your application. For more information on style scoping, read through the Angular documentation.

Head over to src/app/app.component.css and add the following CSS below the global style:

Your style will now appear in the content within the <article> tag in your browser: 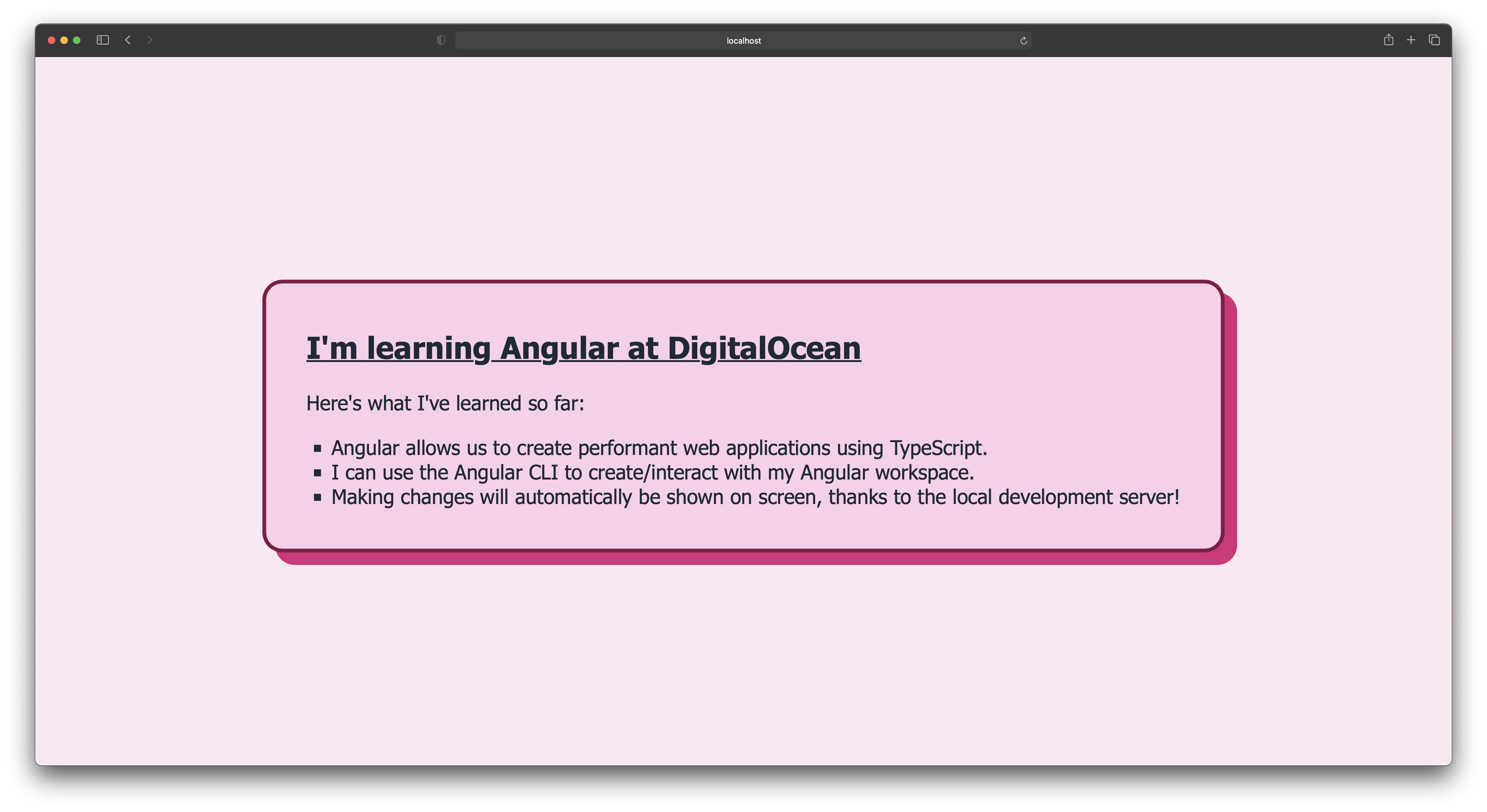 With your styling in place, let’s explore how to change your user interface dynamically.

In this step, you’ll work with TypeScript in your Angular application, found at src/app/app.component.ts. Angular uses decorators to dynamically style your components with ngStyle and ngClass.

Angular components use the JavaScript class syntax. To tell Angular that this class is a component, you’ll need to add a @Component(...) decorator to the class.

Decorators in TypeScript and Angular provide metadata around the class or function declaration. In Angular, they are specifically used to provide metadata to the dependency injection system and the compiler. This allows arbitrary code to run before, during, and after executing a class or function. Angular then associates the files that connect with a component. You can find more information about decorators in TypeScript here.

You can see this in action in the AppComponent created with the CLI. Open src/app/app.component.ts and observe the following:

Notice that the styleUrls property is an array with one value. This is because app-root contains one CSS style sheet. You could add more style sheets to the styleUrls array, and Angular will bundle them together.

The selector is the CSS selector that identifies this component. This will be the name of the component in the HTML template, and you can see this inside of index.html:

Within the AppComponent, create a new variable named myNextProject and assign it the value of a porfolio website:

You can now use the variable as a binder to src/app/app.component.html and connect the data defined in TypeScript to your HTML template. Angular defines TypeScript variables in HTML by surrounding the variable inside double curly braces:

Within src/app/app.component.html, add the variable in the text between the <footer> tag:

The content within the <p> tag will render as For my next project, I'll be making a portfolio website. in the browser: 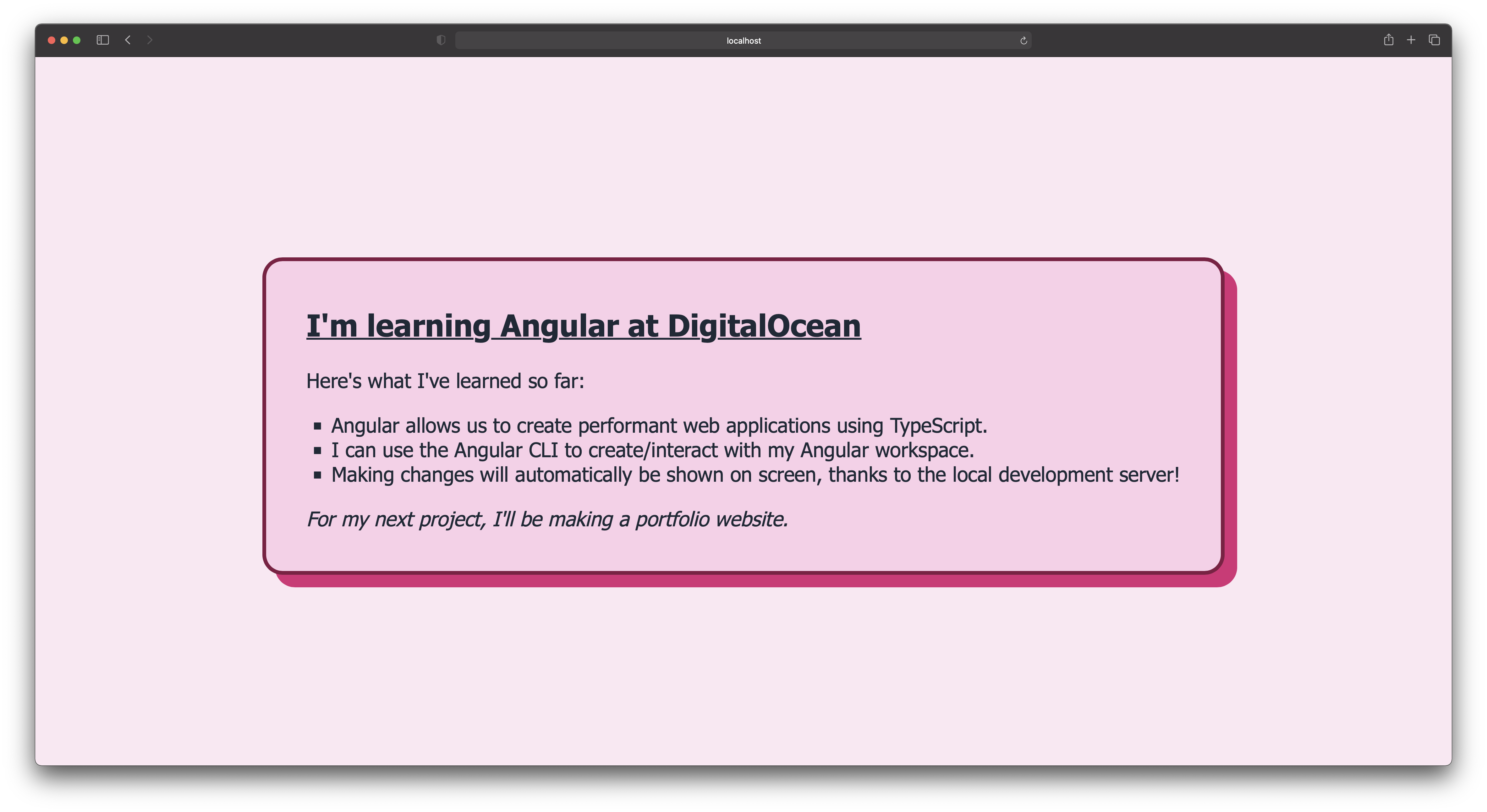 As executed here, binding values in your template allows you to serve dynamic content to your users.

You can also use functions inside of your TypeScript file to determine your outputs as well. In your src/app/app.component.ts, define a new variable showPurpleBoxShadow and a getBoxShadow() function:

Navigate to your src/app/app.component.html file and insert the [ngStyle] directive within your <article> tag:

ngStyle is an Angular directive that binds application state to CSS styles. In Angular, a directive is a “marker” on a DOM element, such as [ngStyle]. Angular is then able to attach functionality to the DOM element.

In this scenario, you’re applying different box-shadow styles depending on the value of showPurpleBoxShadow. You can also achieve the same result with the use of the ngClass directive. Instead of applying CSS styles, this will conditionally apply a CSS class.

Then, in src/app/app.component.ts, update the boxShadow getter to return a class name instead:

You can then use the ngClass directive to conditionally apply the purple-box-shadow class to the <article> tag:

If successful, you will view the following in your browser: 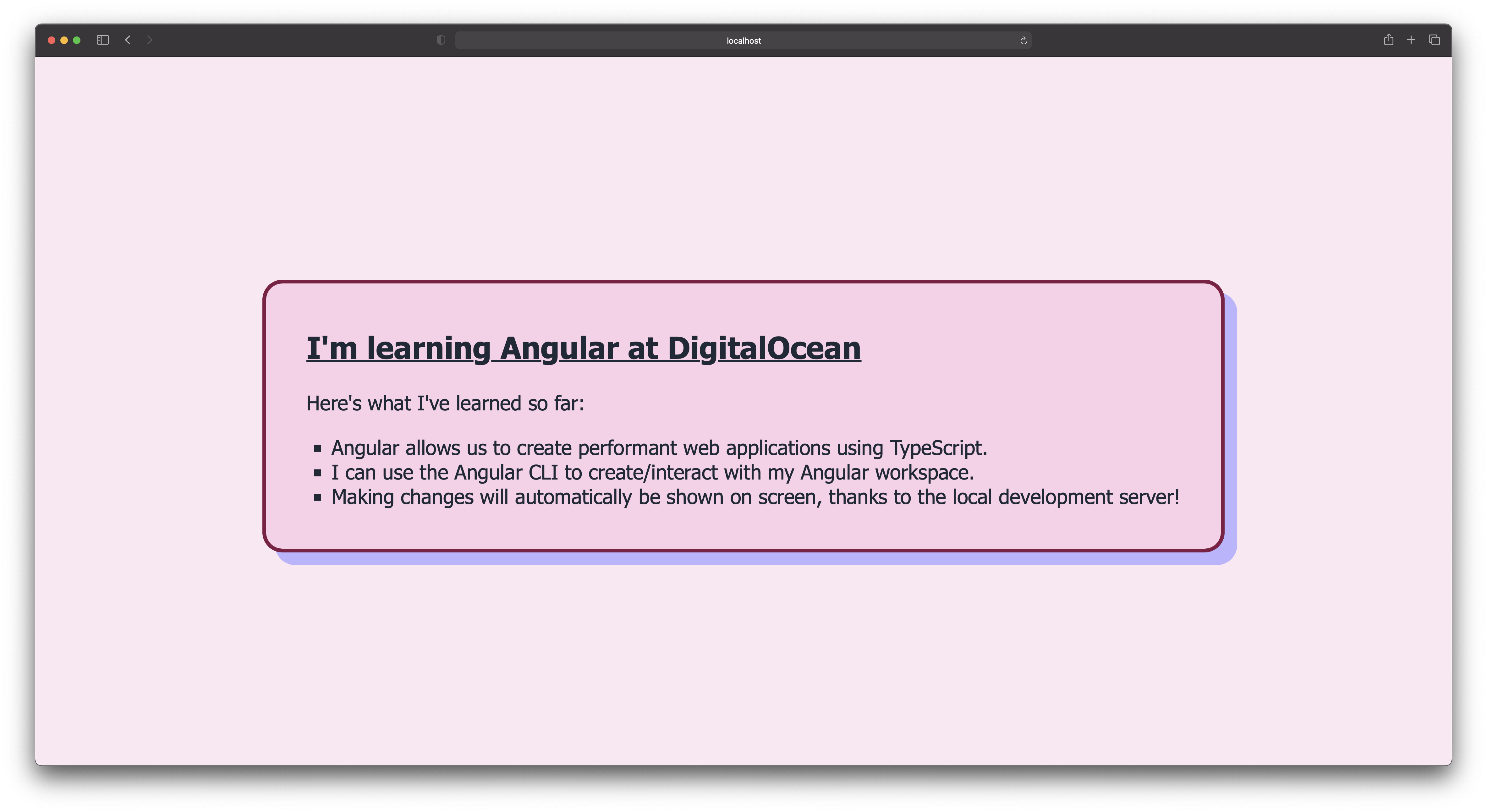 You can now see your design manifest on-screen without additional redeployment after each change. Let’s look at how to build your Angular application for development and production.

In this step, you’ll use the Angular CLI to generate a production build for your Angular project. Angular uses Webpack, which you will use to bundle your files and optimize the site for production.

Webpack is an open-source module bundler for JavaScript applications. It provides the ability to load code/assets on demand. It offers a powerful optimization system that minimizes the number of requests needed to fetch all necessary assets from the server.

To create a custom Webpack configuration file, review the article How To Use Custom webpack Configurations with Angular CLI Builders for more information.

By default, the Angular CLI offers two types of builds:

The unoptimized version of your code containing source maps and runtime checks that help you detect and investigate issues while developing an app before deploying it into production environments.

You can build your project with the development configuration by running the following command in your terminal:

Building your project with the production configuration will generate optimized code and provides you with benefits like:

To generate a production build, run ng build from your project folder. The CLI will lint your code and generate an optimized, minified version of your application.

If successful, it’ll provide you with statistics about the bundle:

Notice how the file names have a unique hash after their name. Angular adds this to allow for “cache-busting”. As the hash changes on each build, browsers can reset their cache when they revisit the site.

The Angular CLI can also show warnings at this stage when the bundle size is too large. You should continue to review bundle sizes as your application grows.

You can find the configuration options that correspond to the Angular CLI commands, such as ng build and ng serve, in the angular.json file. Navigate through the configurations key to view the options set for the production and development builds. You can configure these limits on a per-build basis.

The ng build command outputs these to the dist/my-first-angular-app folder to access the built files for deployment. You can use these files to deploy the application to a server or CDN. For more information on this, see the Angular CLI documentation.

In this step, you learned how to use the Angular CLI to create a development and production build. You also considered important factors that go into producing a performant web application, such as bundle size.

In this tutorial, you created an Angular project using the Angular CLI. You excecuted and ran the project in the browser, and updated the way the application looks and performs.

You used the CLI to generate a production build and learned about configuration options for a deeper insight into how and where the CLI operates.