By Lisa Tagliaferri
Developer and author at DigitalOcean.

Having access to the Twitter API can help you manage your social media accounts, and allow you to mine social media for data. This can be useful for brand promotion if you represent a business or an organization, and it can be enjoyable and entertaining for individual users and hobbyist programmers.

In this article, we will outline the steps necessary for you to create a Twitter application.

We’ll then build a script in Python that uses the Tweepy library to make use of the Twitter API.

Before you begin, ensure you have the following prerequisites in place:

Let’s go through the process of creating a Twitter application and retrieving your API access keys and tokens. These tokens are what will allow you to authenticate any applications you develop that work with Twitter. As mentioned in the prerequisites, you’ll need a valid phone number in order to create applications using Twitter. 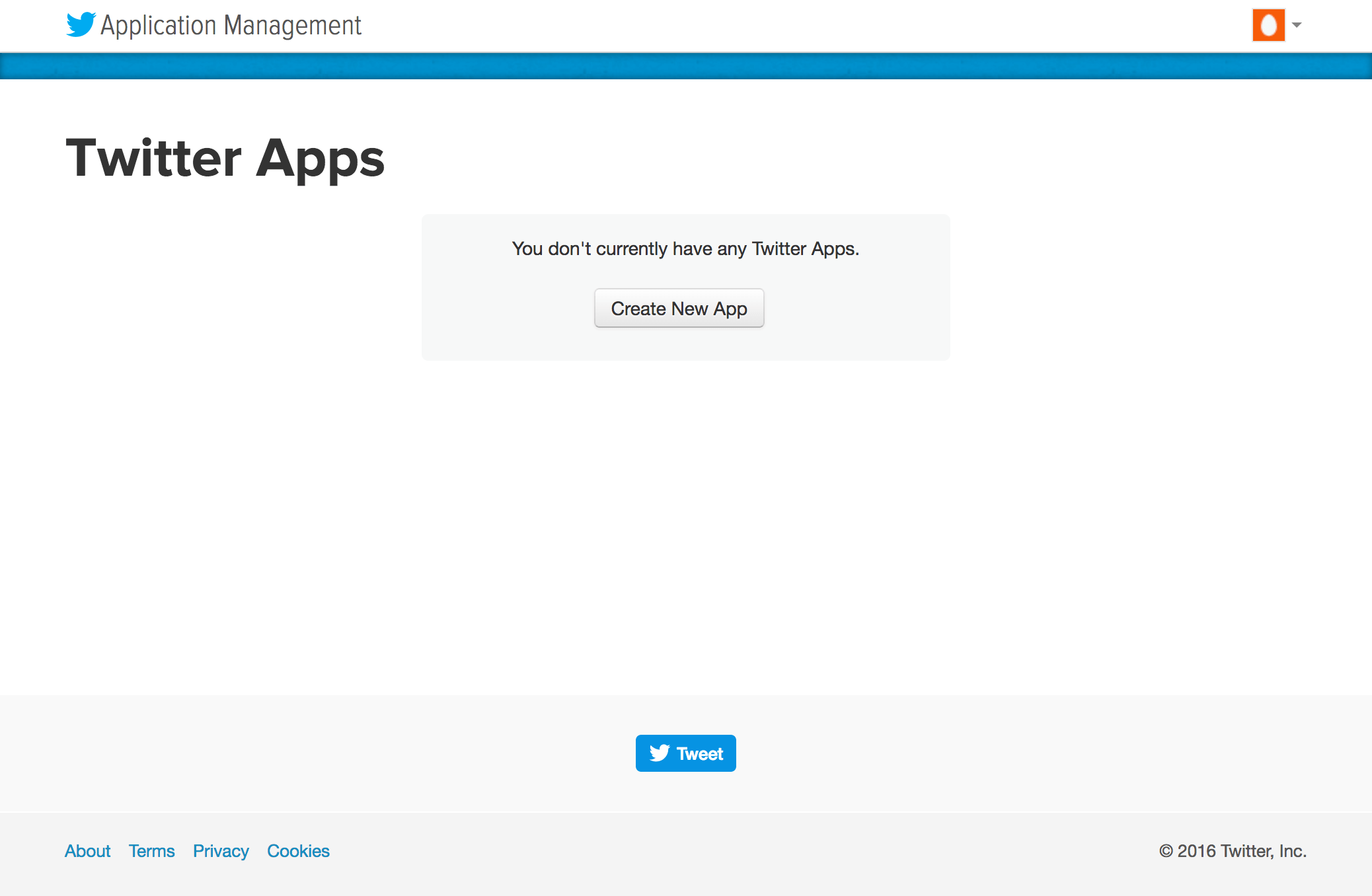 You will now be redirected to the application creation page. 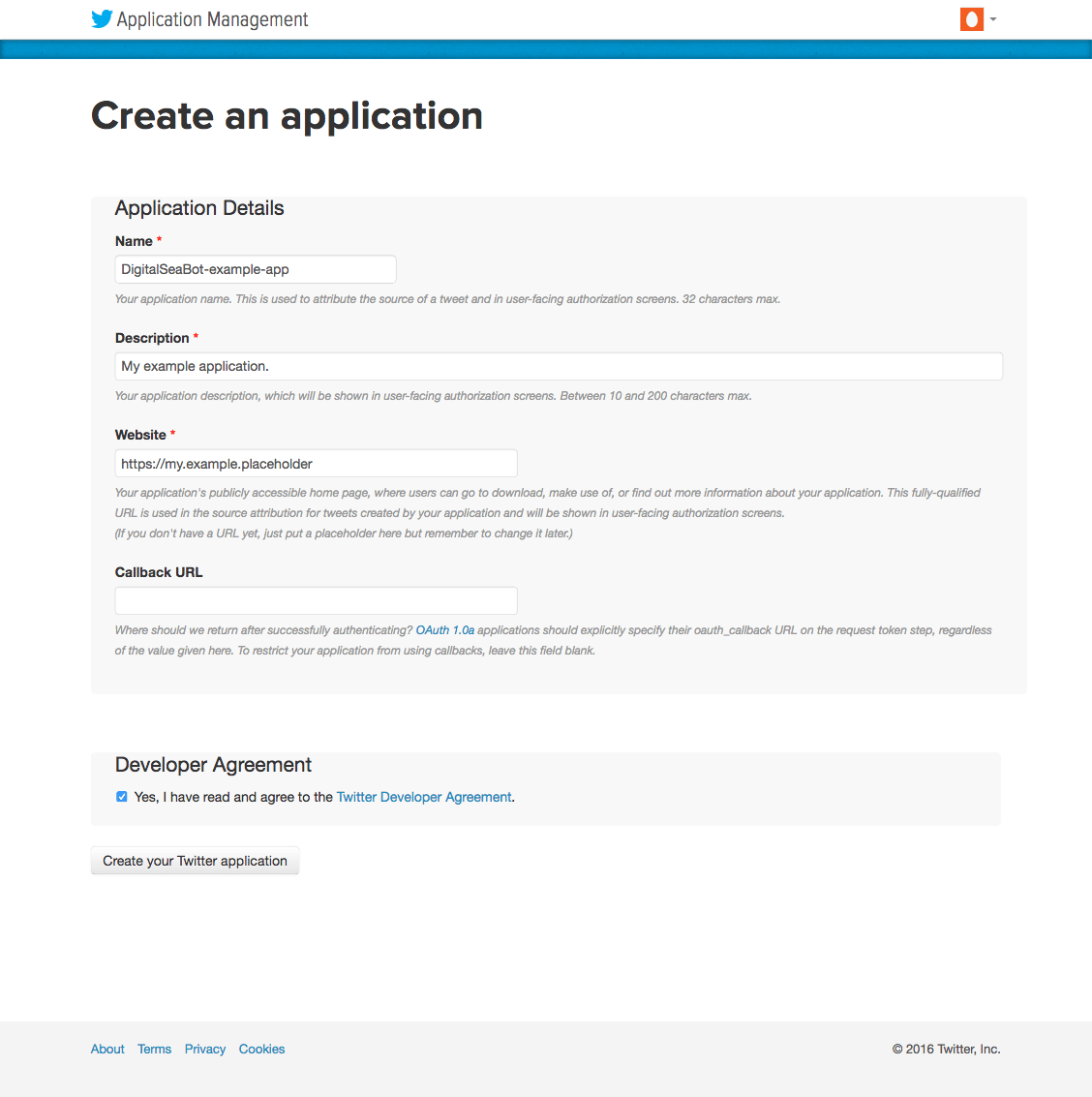 On this page, you’ll fill out the required fields.

Note: The name that you provide for your app must be unique to your particular app. You cannot use the name as shown here since it already exists.

Once you click the Create your Twitter application button at the bottom of the page, you’ll receive a confirmation page. 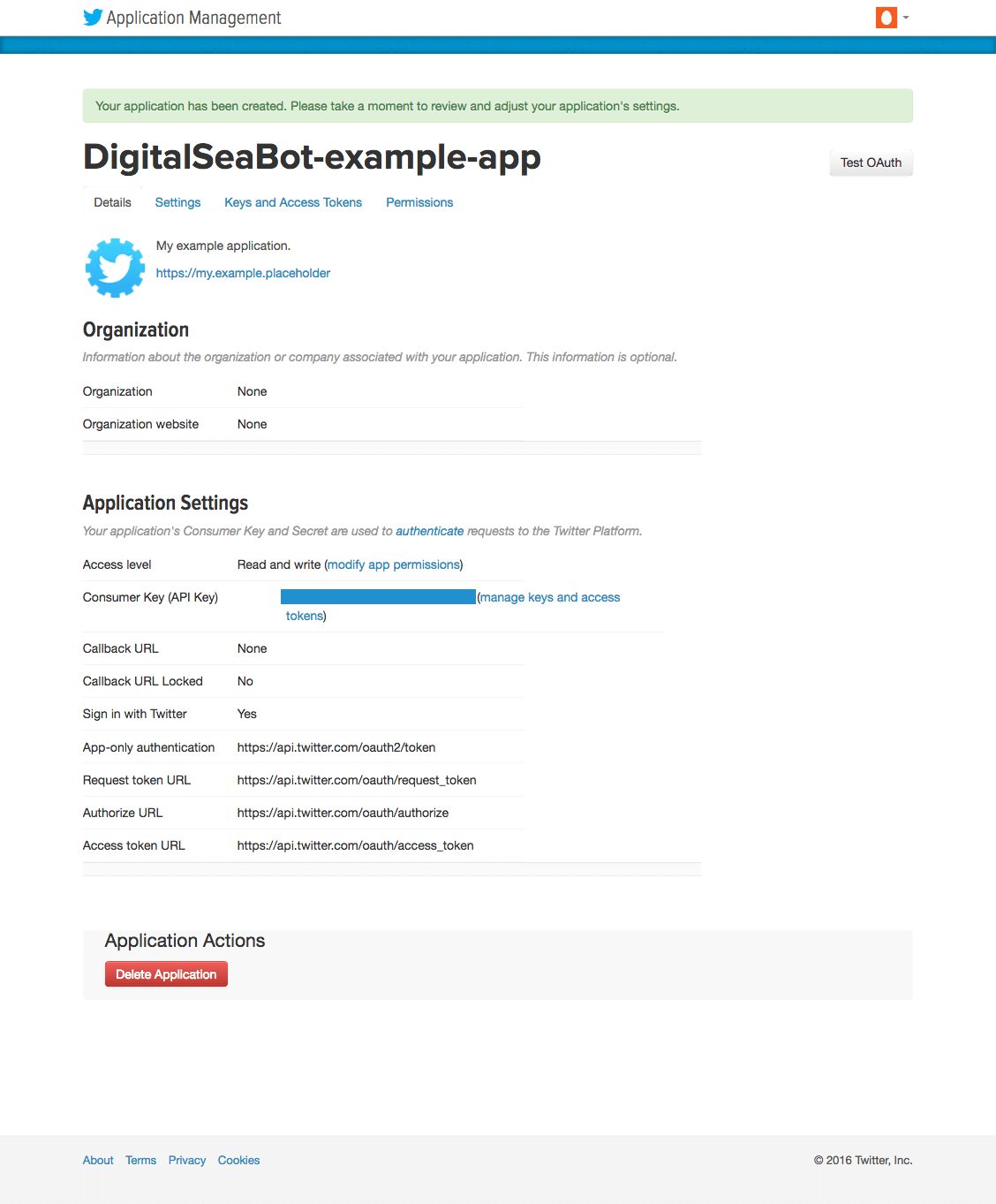 After successfully creating your application, you will be redirected to your application’s Details page, which provides you with some general information about your app.

From the Details page, let’s navigate over to the Permissions page to ensure that we have the appropriate access level to generate our application keys. 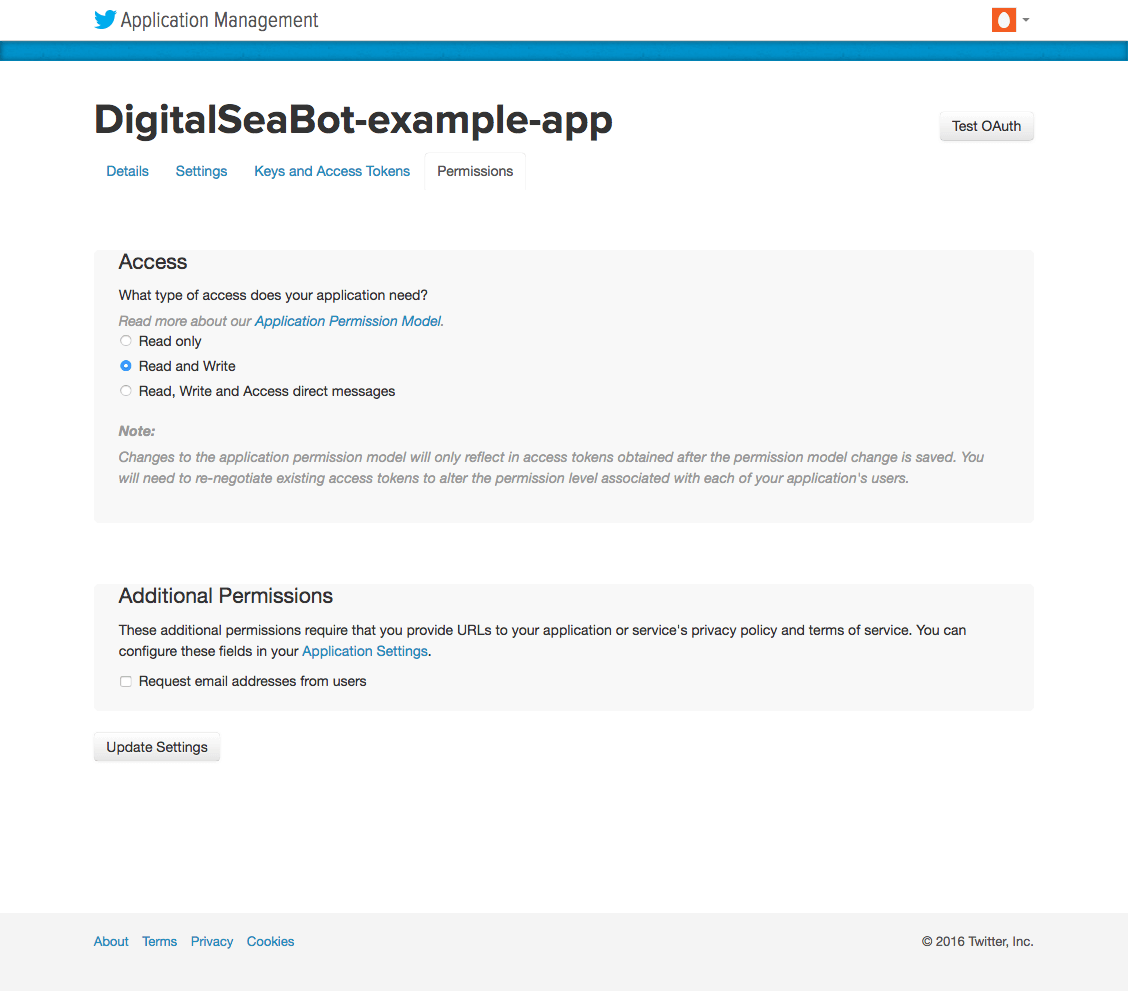 After updating your application’s permissions to allow posting, click the tab labeled Keys and Access Tokens. This will take you to a page that lists your Consumer Key and Consumer Secret, and also will allow you to generate your Access Token and Access Token Secret. These are necessary to authenticate our client application with Twitter. 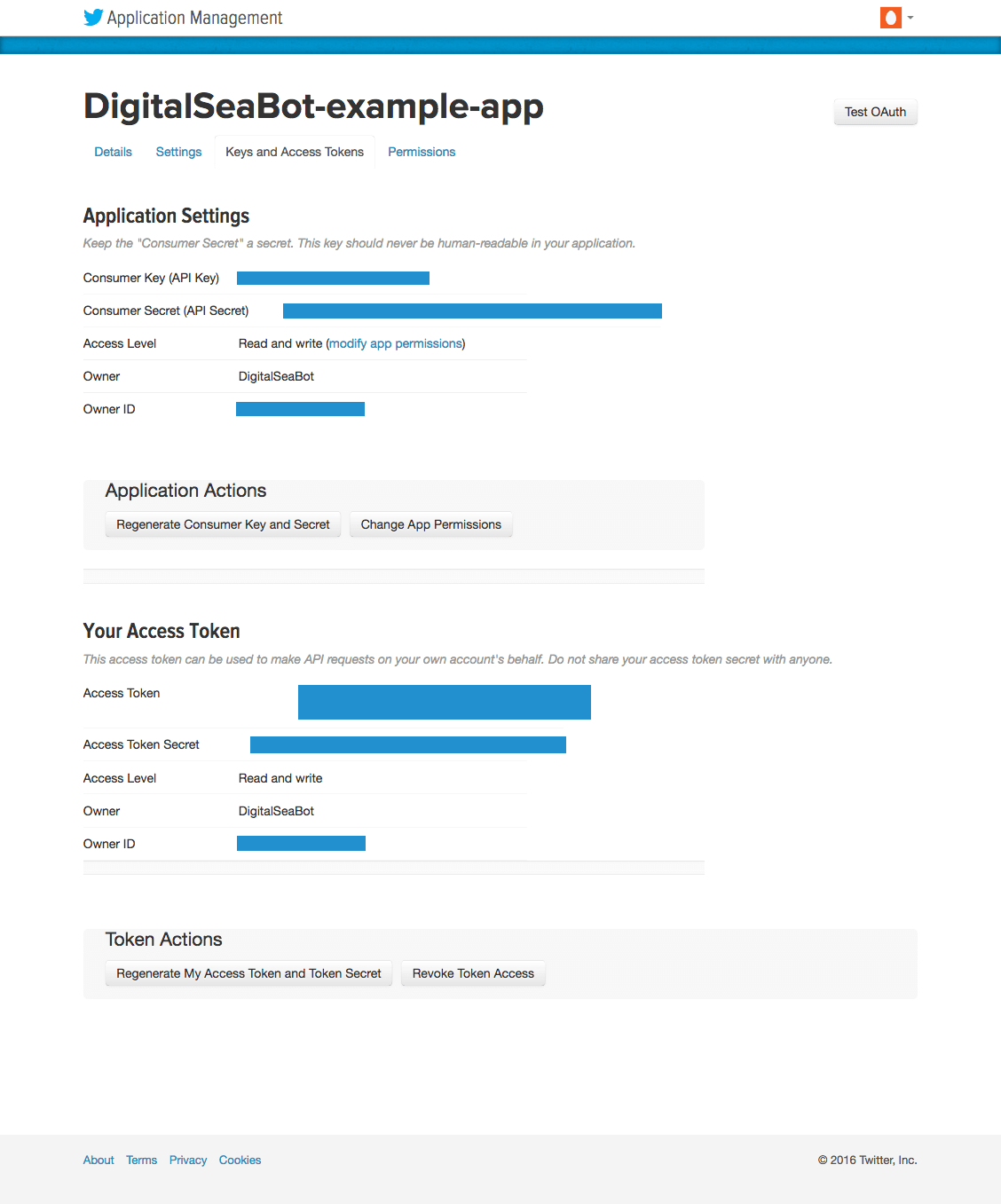 On the page you’re redirected to, you’ll also see the application’s Access Level, your username as the Owner, and your Owner ID.

You can use a variety of programming languages and associated packages to make use of the Twitter API. To test that our Twitter app set-up was successful, we’ll be using Python and the Tweepy package to run a script that outputs a string to our Twitter account.

Tweepy is an open-source and easy-to-use library that allows your Python programming projects to access the Twitter API.

In this step, we’ll use pip to install Tweepy.

Make sure you’re in your Python 3 programming environment and create a new directory or change directories as desired to keep your programming files organized. For our example, we’ll use the directory twitter.

Before installing Tweepy, let’s first ensure that pip is up-to-date:

Once any updates are completed, we can go on to install Tweepy with pip:

With Tweepy installed, we can go on to creating our Python Twitter program.

Step 4 — Create a Python Application that Interacts with Twitter

After successfully creating your Twitter application and generating the necessary keys and tokens, you are now ready to create your client application for posting to your timeline.

Create a new Python program file called helloworld.py with your favorite text editor. We’ll be using nano as an example:

Next, we’ll be making variables for each key, secret, and token that we generated. Replace the items in single quotes with your unique strings from the Twitter apps website (and keep the single quotes).

We’ll next be creating an OAuthHandler instance into which we’ll pass our consumer token and secret. OAuth — which works over HTTP and authorizes devices, APIs, servers, and applications — is a standard that provides secure and delegated access. We’ll also be setting the access tokens and integrating with the API.

Finally, at the bottom of our program, let’s have Tweepy update our status. We’ll create a variable called tweet and pass this variable to the api.update_status() method. In the method we’ll pass status=tweet.

We can now save the file and run the script: 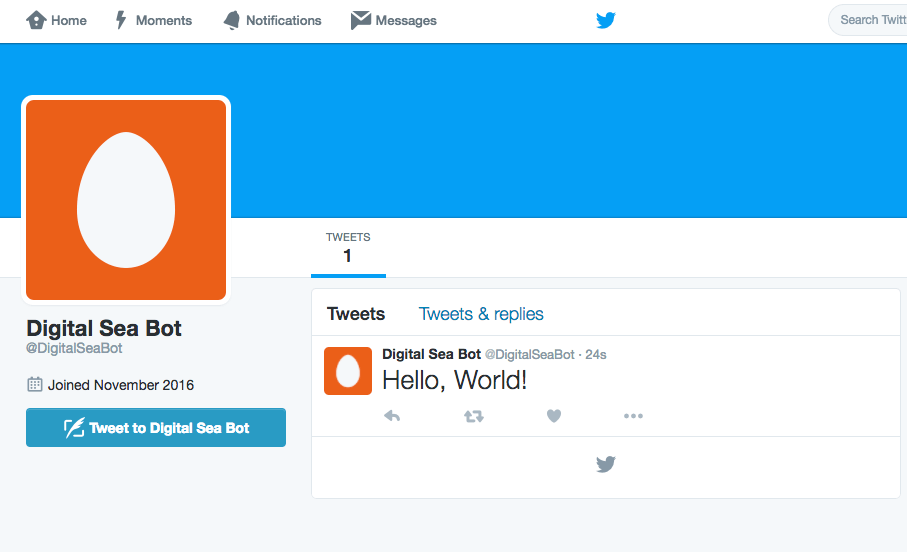 The status is posted to your account’s timeline and you have successfully configured your Twitter application and authenticated using Tweepy!

By following this tutorial, you were able to set up a Twitter application tied to your Twitter username. Once setting up the application and collecting our Consumer Key and Consumer Secret, and generating our Access Token and Access Token Secret, we authenticated a Python 3 application to use it through the open-source Tweepy library.

Ask a questionSearch for more help
Was this helpful?
5 Comments

Hello, @ltagliaferri I would like to know one thing about Tweepy, I want to host a Django web application on the digital ocean which will basically be going to talk to the Twitter API. My goal is to look for a tweet which contains a specific keyword, for example, “my name” and when it does occur I want to save it in my database, so I will be going to use the Tweepy Streamer which can do this task but can you tell me that how long it can last before crashing, because I don’t want to restart my script again and again. And can you suggest me how we can schedule a task on digital ocean so that it runs after a specific time, like run after every 7 days.

Thanks for the tutorial. however I keep getting this error. “[{‘code’: 32, ‘message’: ‘Could not authenticate you.’}”

I did regenerate my keys , checked my permission settings and nothing worked. Would love to hear your input.

After writting source code that is given above i got syntax error in consumer key,secret ,access token and secret again and again.Please tell me solution of this problem.

Very cool. Worked for me, but I did get the following error: