How To Perform Continuous Integration Testing with Drone.io on CoreOS and Docker

By Aaron Shea
Developer and author at DigitalOcean.

Want a minimal setup continuous integration solution? Who wouldn’t! Drone.io uses Docker containers to run your tests, and works with GitHub, GitLab (self-hosted and service based), and Bitbucket.

Drone is built using Go and utilizes Docker. It can be run inside a container itself with very little configuration.

Continuous integration is the development practice of making frequent commits to your code base, and building and testing as you go. This means that new code will (hopefully) integrate quickly and easily your existing code base. Since continuous integration requires that you build and test your code frequently, it speeds up the development process if you can build and test automatically. Drone does this; it automates the process of building and testing.

Drone pulls code automatically from a hosted Git repository, and then run scripts you define. You can run any test suite and have it report back to you via email or indicate the status with a badge in your README. Drone’s integration with Docker means it can support a huge number of languages including PHP, Node, Ruby, Go, and Python, to name a few. Each test will spawn a new container based off of specified images from the Docker Public Registry. This means that the support for languages and development stacks will only increase as more images are created. You can even make your own to fit your specific application!

In this tutorial we’ll be taking a look on how we can containerize Drone.io so it can be run using the minimal Linux distribution CoreOS.

It is recommend to read this Introduction to CoreOS before continuing if you have never used the operating system before.

Before we begin, we need to enable access to our GitHub accounts via oAuth. We’ll be generating a pair of tokens to be used in the next step of setting up the Drone container.

We need to generate these values from your GitHub account. Click here to go to the appropriate settings page on GitHub, called Applications.

Click the Register new application button on the upper right. This will bring up a new form to fill out: 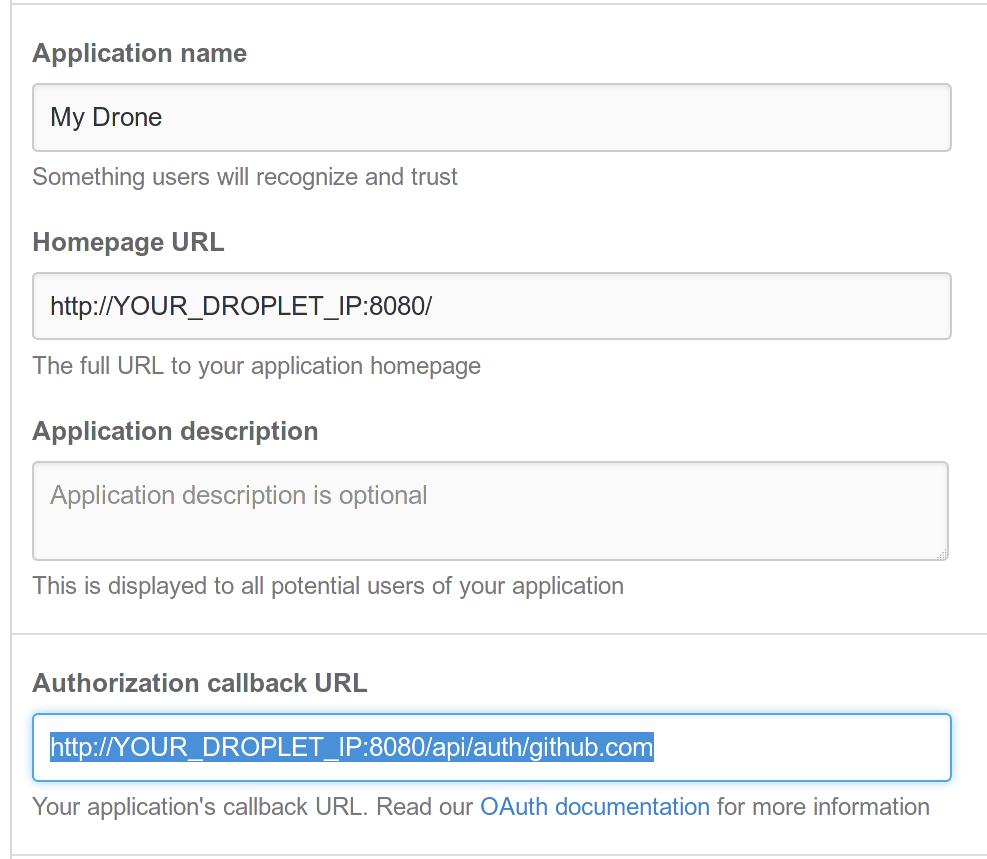 IMPORTANT: Make sure the Authorization callback URL is set to http://YOUR_DROPLET_IP:8080/api/auth/github.com in order to authenticate properly!

Once you’re set with that, click Register application to be brought to the new application’s information page.

You’ll need two bits of information from here, the Client ID and Client Secret. (Keep the Client Secret actually secret! This is NOT something you should share with anyone!)

These tokens will be used to authorize our own Drone application to add webhooks to any GitHub repository we add to Drone via the Dashboard panel. The webhooks will trigger on every new commit we push to GitHub, and this will cause Drone to clone the new changes and run the build.

Make note of these tokens, as we will need them in the next step.

Once you have your CoreOS Droplet all ready to go, connect to it via SSH:

Due to the read-only nature of CoreOS’s root file system, we cannot install Drone.io directly. We need to containerize it using Docker first. We’ll set up a Dockerfile that contains instructions on installing Drone.io just like we would on a stock Ubuntu system.

We will be using the terminal-based text editor vim in this section. This is the default text editor on CoreOS so it’s important to familiarize yourself with it. We’ll show you step by step how to use it to open and edit the file.

Now it’s time to use vim to create our Dockerfile. Run the command:

This opens vim and creates a new file called Dockerfile in your current directory.

Now enter insert mode. To do this, press the i key. The bottom left corner of the terminal should now say: -- INSERT --. Now you can type or paste in the Dockerfile contents.

Here’s the Dockerfile in its entirety. Comments are included in-line for each section. You can copy this file exactly:

Replace the <CLIENT_TOKEN_HERE> and <CLIENT_SECRET_HERE> with the tokens noted from the step above.

Type the command below to save the changes we’ve made. The w tells vim to write the text to the file, and q will cause vim to quit.

A very quick overview for those who aren’t familiar with Dockerfiles:

For more information about the types of statements you can make in Dockerfiles, read the official Docker documentation.

At this point we can build the image using the following command:

This will take a few minutes to complete. Once it builds successfully, we can spin up a container using our new image.

Drone.io needs a place to store information, so we’ll be using an SQLite database file. Create an empty file to start with:

This file will be populated with data by Drone once the container is up and running.

Launching Drone is fairly straightforward, but we need to do a few extra steps to ensure that Drone can access our host’s Docker server. The easiest way to do this to use a volume to bind the host socket file to the location where the container’s socket file would be. The command to properly start the container is below:

Going line by line, let’s take apart what exactly is going on:

After you execute that command, if any errors occur, be sure to double-check that you have created the empty database file, and that all the paths are correctly entered.

To ensure the container is running, do a quick status check:

Your output should look similar to the following:

If you ran docker ps and got no results, please double-check the long docker run command from above, and ensure you typed it exactly. You can try running it without the line breaks. Also make sure you created the empty drone.sqlite file in the correct directory.

To rebuild the container and try again, we need to remove the broken container from Docker; otherwise, it will complain of duplicate named containers.

Remove the old container using docker rm drone-ci (notice we used the name we gave the container in the command above). Then, try running the long docker run command from the previous section again.

If the container started but you cannot access the installation page, then you should try to restart it. Stop the container using docker stop drone-ci. Or for a more aggressive stop, use docker kill drone-ci. Then, try to start it again with docker start drone-ci.

If you want to do some digging in the container logs, you can use Docker’s log command: docker logs drone-ci.

Step Three — Set Up the Drone

Now we’re ready to set up Drone with the initial account. Open your web browser and navigate to: http://YOUR_DROPLET_IP:8080/login. You should see a login screen like the one below: 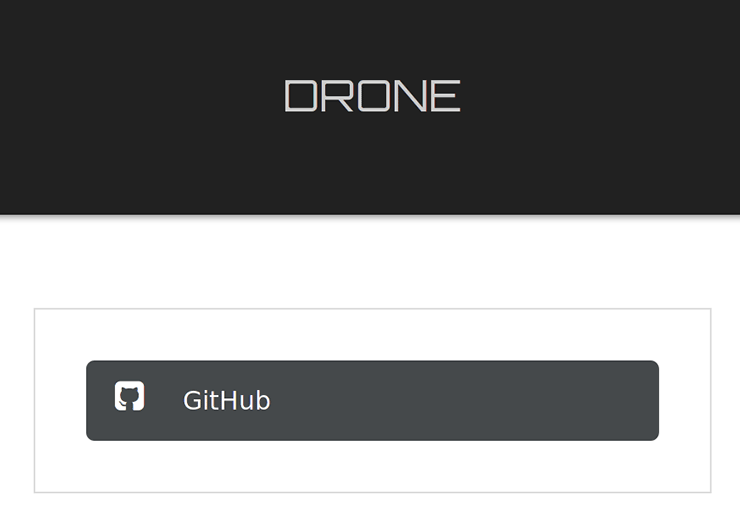 We only see GitHub because it’s the only service we set in the Dockerfile.

Now click the GitHub button, then the Authorize application button to start the login and sync process.

This is the main dashboard for Drone, you can see the three most recent repositories in your GitHub account, and expand the list by clicking “BROWSE ALL”. If all of your repos do not appear, simply click “SYNC” in the upper right hand corner.

Feel free to explore the dashboard.

Next we need to allow access to your various Git repository sources.

Find the name of the repository you’d like to add to Drone CI and select it. This will activate Drone and add webhooks to your repository.

After activation, you will see the blank repository status page:

You can explore some of the more advanced settings for repository using the button in the upper right corner.

We need to make a new file in the repository called .drone.yml. This will command Drone and tell it how to build and test the code in the GitHub repository. Here is a very simple file we will use to test if Drone is set up properly.

This script just echoes “hello world” to prove that Drone is working. It doesn’t actually test anything about your code.

In a real build and test scenario, you’d want to have Drone use a Docker image that matches your production environment, and you’d want the scripts to test the code in the repository.

Drone will detect the new commit, clone any changes made to the code, and follow the instructions defined in the .drone.yml file. It will display a notification on the bottom of the page to let you know the build is running, click it to see the build status page.

The build will take a few minutes as Drone needs to pull the image from the Docker public registry.

If the build passes, you can click on the commit to see more details. You should see output similar to the following:

You might also see a few warnings related to Perl; that’s fine.

If you completed all these steps and your build passes, you now have your own personal Drone.io worker ready to build and test almost any language-based project!

Drone also supports Bitbucket and GitLab, and the setup processes using OAuth are relatively the same as Github’s. You may need to edit the Dockerfile and rebuild the container using the correct environment variables:

Now that you have Drone ready to run builds, you can modify the .drone.yml to do some more advanced testing.

For example, if you wanted to test a Node application using a test framework such as Karma or Mocha, you can change the image section to the official node image, and change the script section to execute npm and run the tests! Take a look around the Docker registry for images that might suit your application.

If you want to get really fancy, you can look into something called Drone Wall to provide a display board of all your build statuses.

Have fun commanding your Drone!

Hi, I can’t get the install page. This is what I see: https://dl.dropboxusercontent.com/u/20146711/drone-install-page.png

failed when I just tried to build from the dockerfile.

Maybe sudo is not installed by default in the latest ubuntu image. I don’t think sudo is required for this and it works fine without it:

@OneBill If you had reported that problem to Drone it would probably not still have been an issue… I reported it now at least: https://github.com/drone/drone/issues/993. Please supply more helpful information to that issue to help resolving it faster. Thanks

For some reasons I get a blank page when I try authorize my account ( ip/login ). How can I inspect the drone logs? It seems there is no log file whatsoever.

(How) did you solve the CoreOS/Btrfs problems with slow Drone.io builds?

This is preventing me from introducing the DigitalOcean + CoreOS + Drone.io stack at our company, as it takes up to 10 minutes before the build even starts, which is unacceptable.