How To Deploy a React Application to DigitalOcean App Platform

The author selected Creative Commons to receive a donation as part of the Write for DOnations program.

Note: This tutorial shows how to deploy static assets and sites using React and App Platform. If you are looking to deploy a React application with dynamic, back-end code, check out the App Platform React sample in the official documentation.

DigitalOcean’s App Platform is a Platform as a Service (PaaS) product that lets you configure and deploy applications from a source repository. After configuring your app, DigitalOcean will build and deploy the application on every change, giving you the benefit of a full web server and deployment pipeline with minimal configuration. This can be a quick and efficient way to deploy your React applications, and if you are using React to build a site with no backend, you can use App Platform’s free tier.

In this tutorial, you’ll deploy a React application to the DigitalOcean App Platform using the free Starter tier. You’ll build an application with Create React App, push the code to a GitHub repository, then configure the application as a DigitalOcean app. You’ll connect the app to your source code and deploy the project as a set of static files.

By the end of this tutorial, you’ll be able to configure a React application to deploy automatically on every push to the main branch of a GitHub repository.

In this step, you’ll create a React application using Create React App and build a deployable version of it.

To start, create a new application using Create React App on your local machine. In a terminal, run the command to build an application called digital-ocean-app:

The npx command will run a Node package without downloading it to your machine. The create-react-app script will install all of the dependencies and will build a base project in the digital-ocean-app directory. For more on Create React App, check out the tutorial How To Set Up a React Project with Create React App.

The code will download the dependencies and will create a base project. It may take a few minutes to finish. When it is complete, you will receive a success message. Your version may be slightly different if you use yarn instead of npm:

Now that you have a base project, run it locally so you can test how the project will appear on the server. First, change into the directory:

When the command runs, you’ll receive output with the URL for the local development server:

Open a browser to http://localhost:3000 and you’ll find your project: 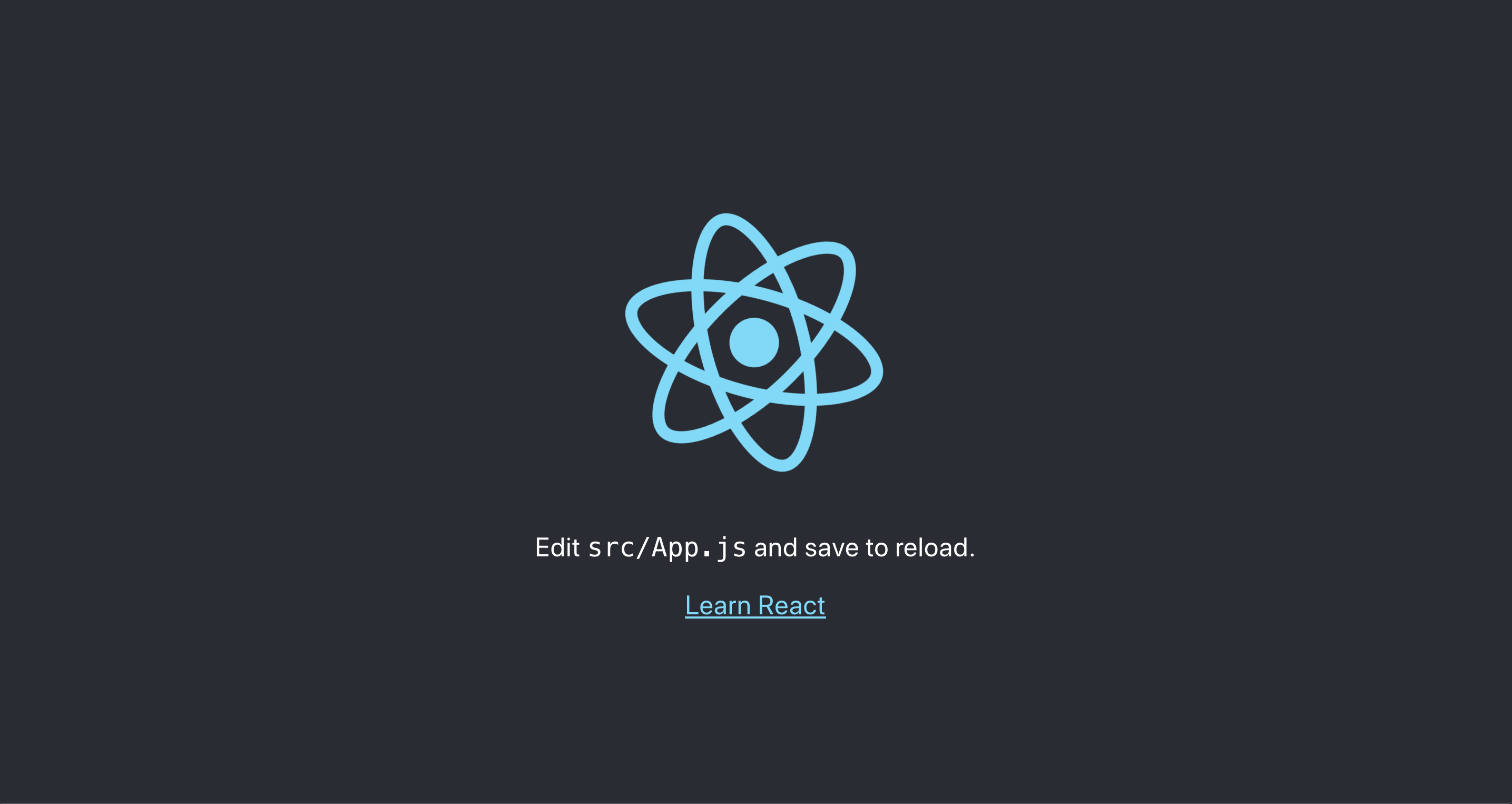 Stop the project by typing either CTRL+C or ⌘+C in the terminal.

Now that you have a working React application, you can push the code to a GitHub repository.

Step 2 — Pushing the Code to GitHub

To deploy your app, App Platform retrieves your source code from a hosted code repository. In this step, you will push your React app code to a GitHub repository so that App Platform can access it later. 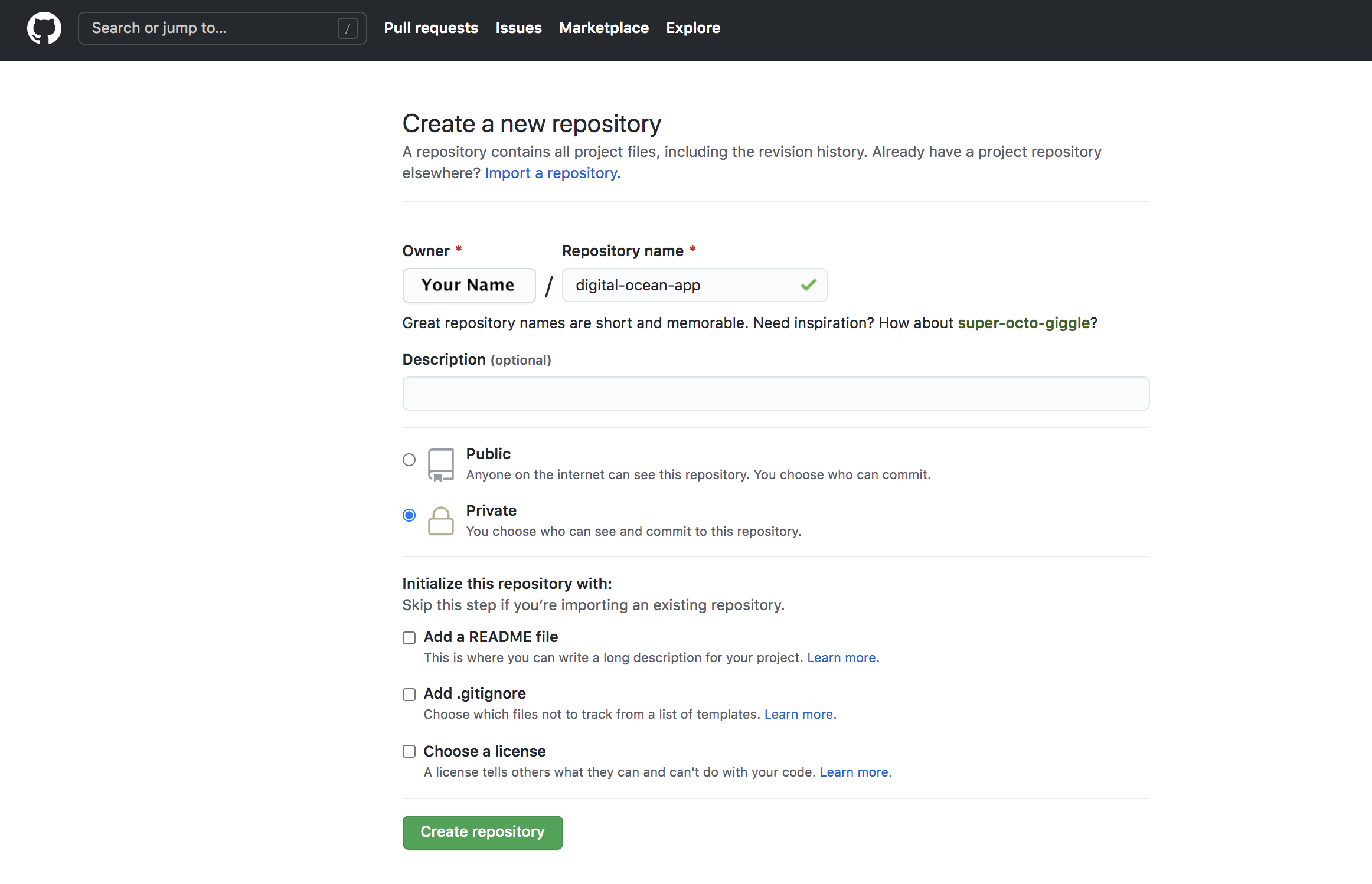 Create React App automatically initializes your project with git, so you can set up to push the code directly to GitHub. First, add the repository that you’d like to use with the following command:

Next, declare that you want to push to the main branch with the following:

Finally, push the code to your repository:

Enter your GitHub credentials when prompted to push your code.

When you push the code you will receive a success message. Your message will be slightly different:

You’ve now copied your code to the GitHub repository.

In this step, you’ll deploy a React application to the DigitalOcean App Platform. You’ll connect your GitHub repository to DigitalOcean, configure the project to build, and build your initial project. After the project is live, each change will trigger a new build and update.

By the end of this step, you’ll be able to deploy an application with continous delivery on DigitalOcean. 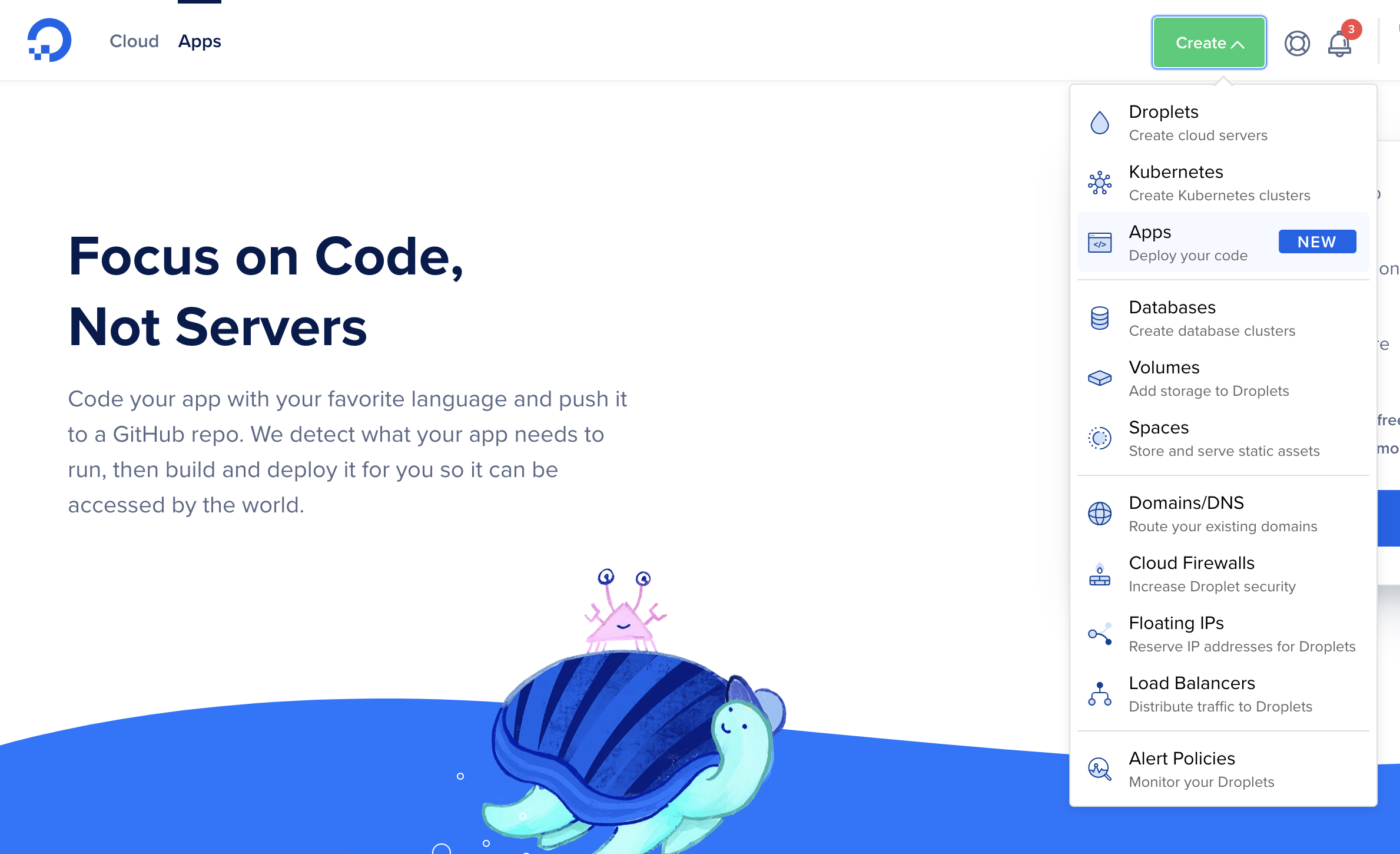 You’ll next be prompted to link your GitHub repository. If you have not yet connected it, you will need to log in with your username and password and give DigitalOcean authorization to access your repositories:

Once you link your account, select the repository you’d like to connect on the GitHub authorization screen. In this case, you are using the digital-ocean-app repository, but you can connect more repositories if you would like: 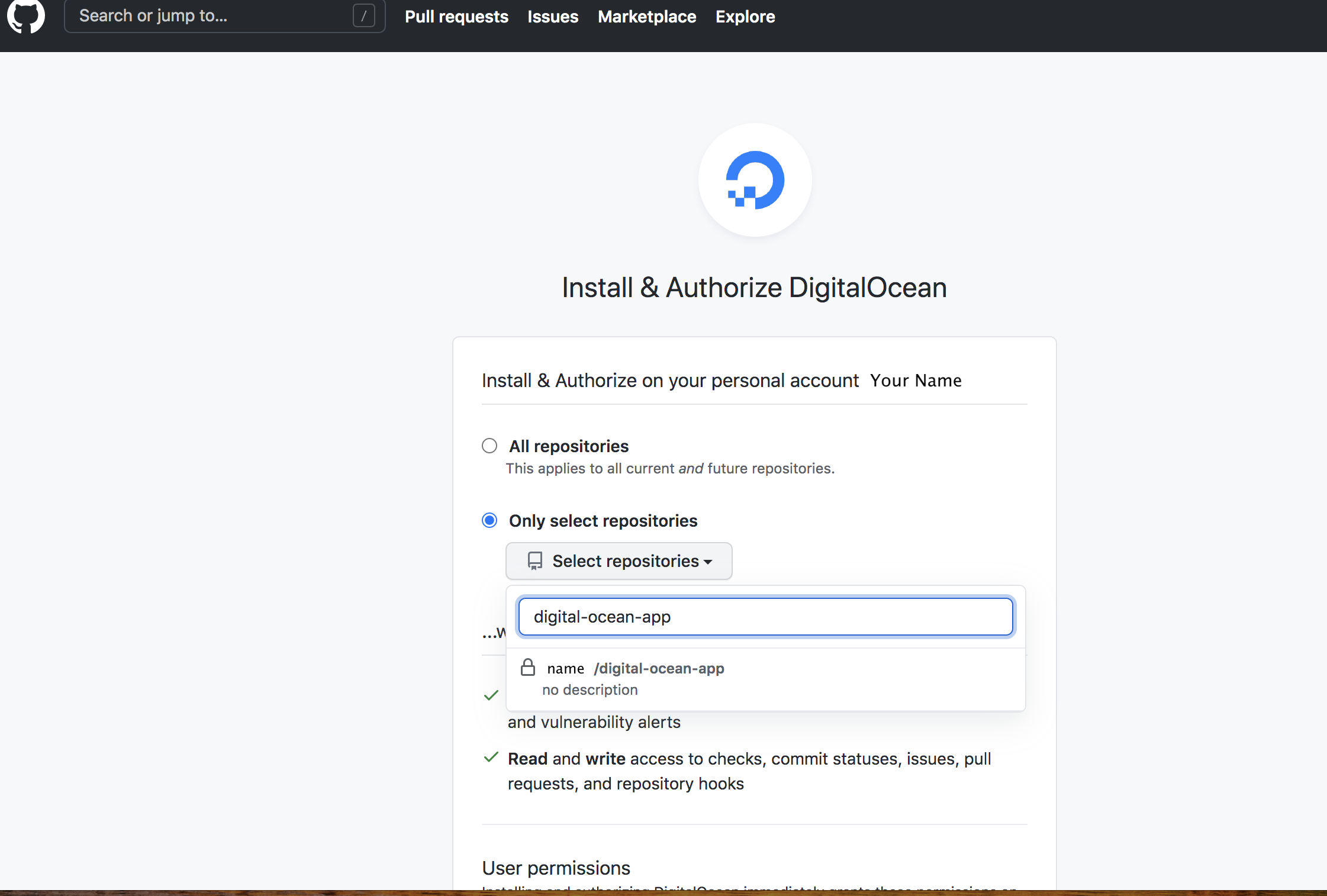 After selecting the repository, you will reconnect to the DigitalOcean interface. Select digital-ocean-app from the list of repositories, then press Next. This will connect your App directly to the GitHub repo: 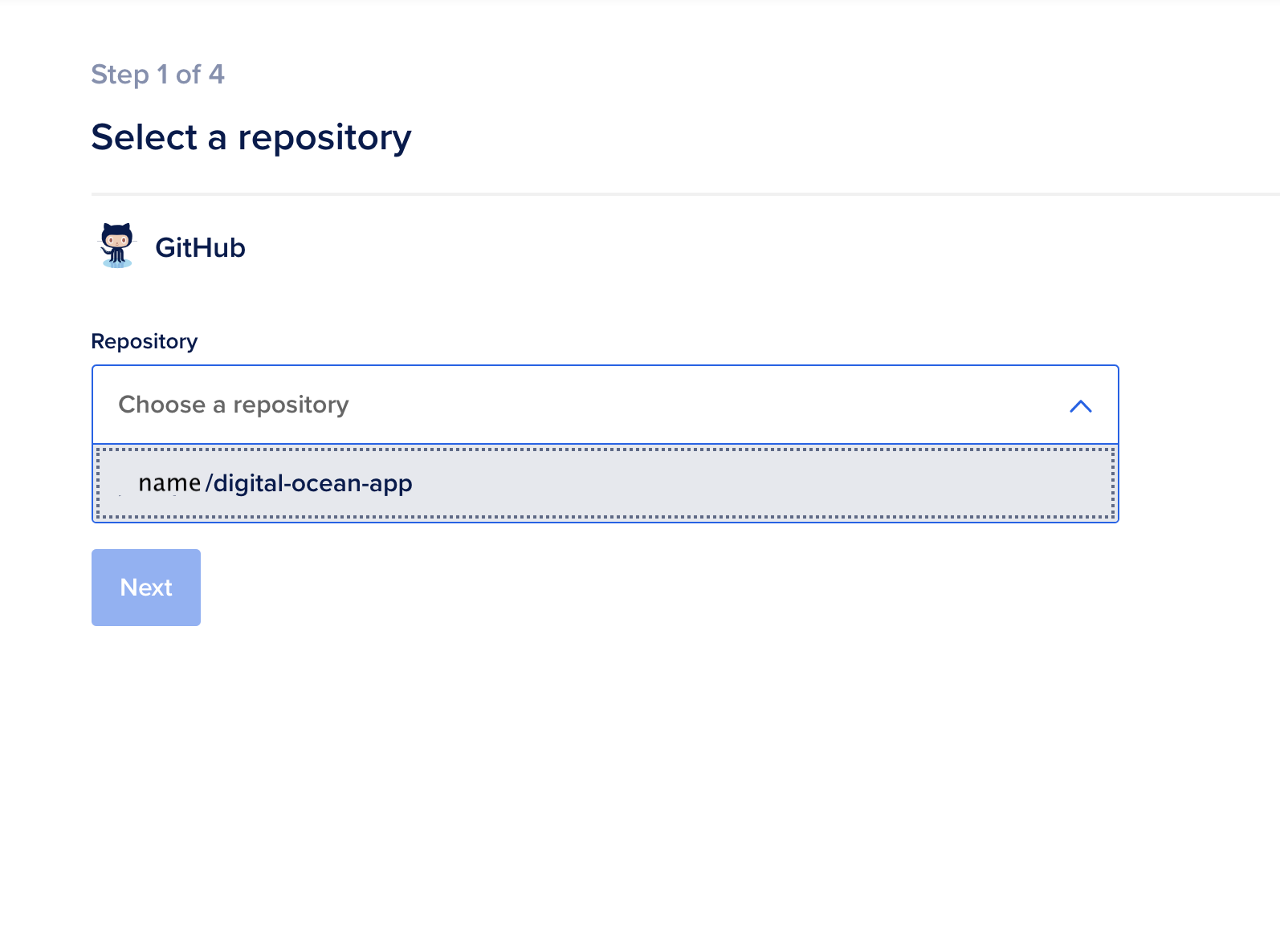 Now that you have selected your repository, you need to configure the DigitalOcean App. In this example, the server will be based in North America by choosing New York in the Region field, and the deployment branch will be main. For your app, choose the region that is closest to your physical location: 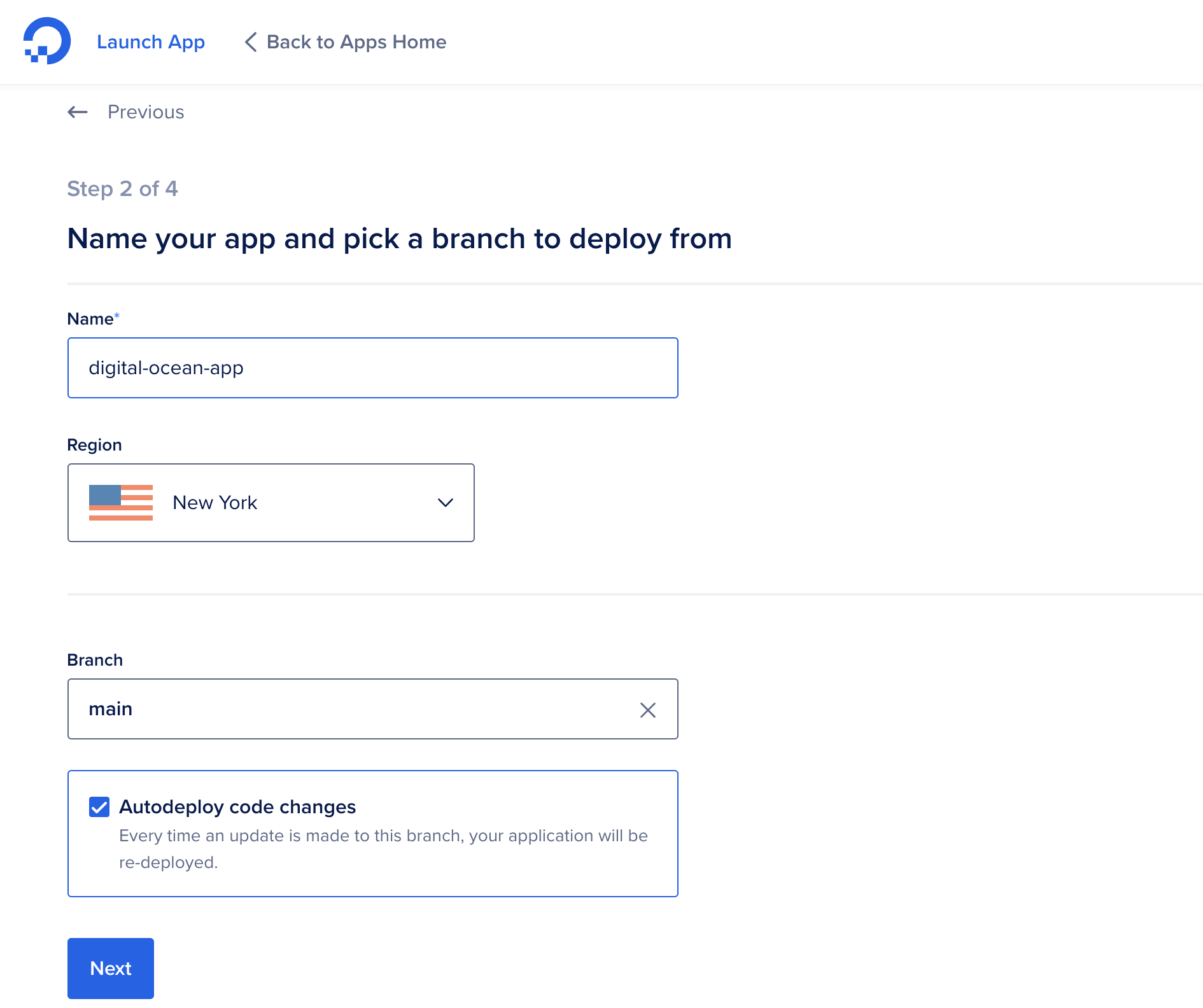 For this tutorial, you are checking Autodeploy code changes. This will automatically rebuild your app every time you update the code.

Press Next to move on to the Configure your app screen.

Next, select the type of application you will run. Since React will build static assets, select Static Site from the dropdown menu in the Type field.

Note: Create React App is not a static site generator like Gatsby, but you are using static assets, since the server does not need to run any server-side code such as Ruby or PHP. The app will use Node to run the install and build steps, but will not execute application code at the free tier. 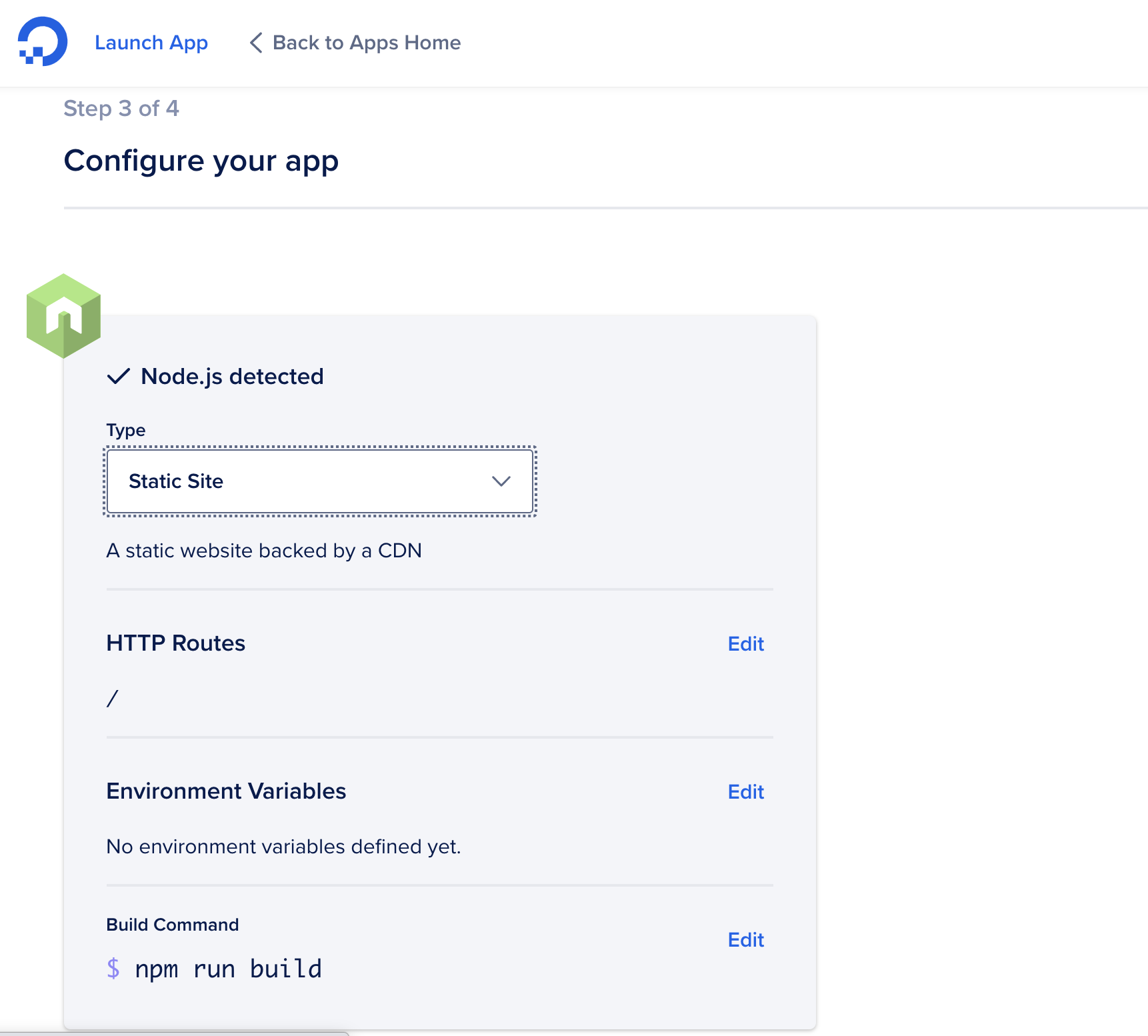 Press Next to move on to the Finalize and launch page.

Here you can select the price plan. The free Starter tier is made for static sites, so choose that one:

Press the Launch Starter App button and DigitalOcean will start building your application. 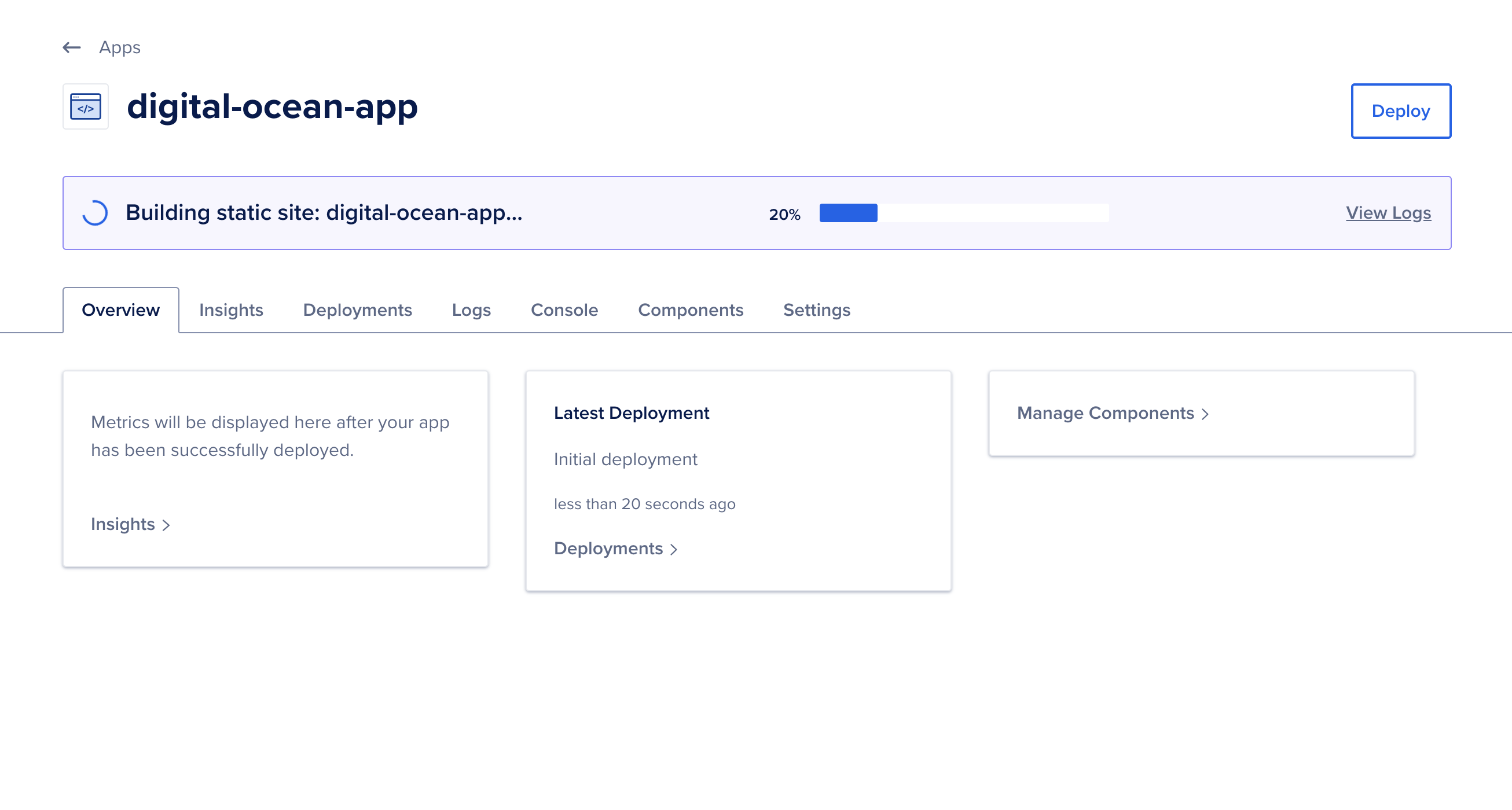 The app will run the npm ci and npm build scripts in your repo. This will download all of the dependencies and create the build directory with a compiled and minified version of all of your JavaScript, HTML files, and other assets. You could also create a custom script in your package.json and update the Commands in the Components tab of your application on App Platform.

It will take a few minutes for the build to run, but when it is finished, you will receive a success message and a link to your new site. Your link will have a unique name and will be slightly different: 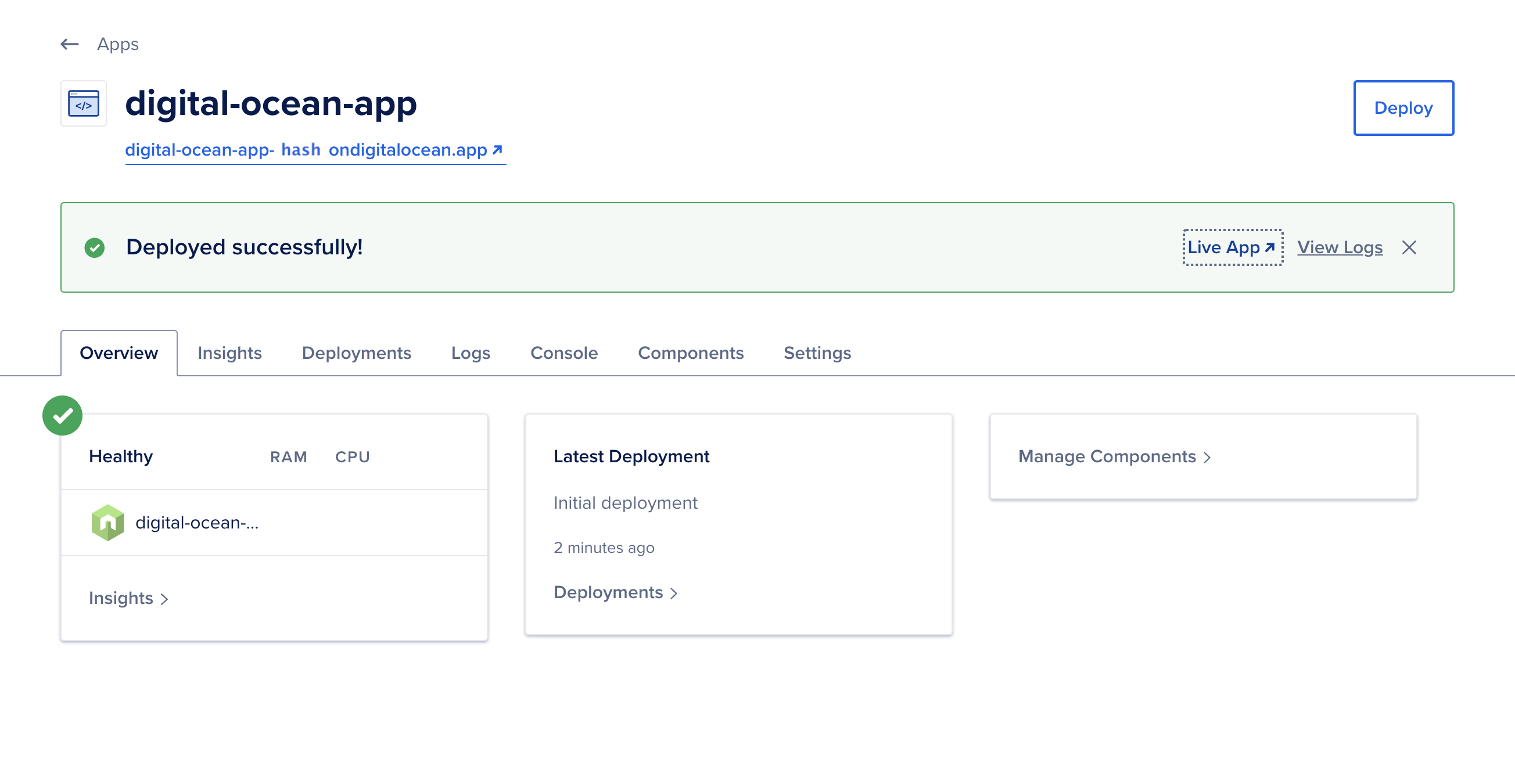 Press Live App to access your project in the browser. It will be the same as the project you tested locally, but this will be live on the web with a secure URL: 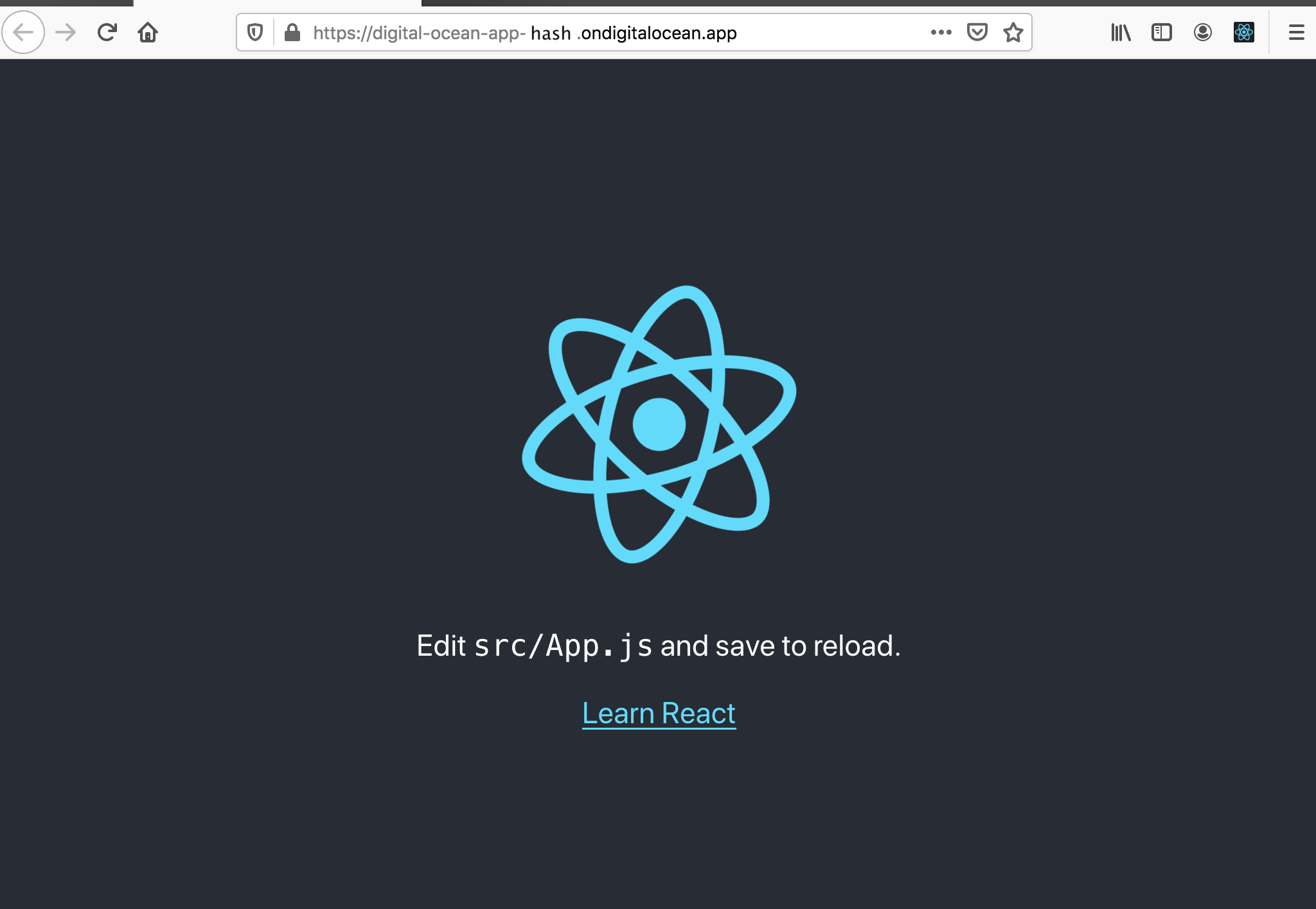 Now that your project is configured, any time you make a change to the linked repository, you’ll run a new build. In this case, if you push a change to the main branch, DigitalOcean will automatically run a new deployment. There is no need to log in; it will run as soon as you push the change:

In this step, you created a new DigitalOcean app on App Platform. You connected your GitHub account and configured the app to build the main branch. After configuring the application, you learned that the app will deploy a new build after every change.

DigitalOcean’s App Platform gives you a quick tool for deploying applications. With a small initial set up, your app will deploy automatically after every change. This can be used in conjunction with React to quickly get your web application up and running.

A possible next step for a project like this would be to change the domain name of the app. To do this, take a look at the official documentation for App Platform.

Next in series: How To Code in React.js eBook ->

Tutorial Series: How To Code in React.js

React is a popular JavaScript framework for creating front-end applications, such as user interfaces that allow users to interact with programs. Originally created by Facebook, it has gained popularity by allowing developers to create fast applications using an intuitive programming paradigm that ties JavaScript with an HTML-like syntax known as JSX.

In this series, you will build out examples of React projects to gain an understanding of this framework, giving you the knowledge you need to pursue front-end web development or start out on your way to full stack development.

Ask a questionSearch for more help
Was this helpful?
6 Comments
Login to Comment
SandyNavyShark • March 16, 2022

After doing the above, how can I connect this app to DNS? instead of the default digital ocean link shown there?

I followed this tutorial and it worked perfectly, but my app (React) is being started in development mode. Any idea how I can change this? I am sort of new to React so I don’t know if I have to change anything in the project. Thank you!

is there any way to configure a wildcard route to redirect all the requests to “/”.

Every time the code gets pushed, app builds automatically, but it takes more than 20min. Is this supposed to be like that? You’ve mentioned it might take couple minutes.

I loved every post on React! it was very well explained and easy to follow! Thank you very much for sharing your knowledge.